Preface to the French translation of Ashraf Fayadh second collection

Though I am not accustomed to this, I would like to start this letter with a quote: “courage is a matter of organization”, as André Malraux used to say. Why is that?  You know that I too was jailed for some years and  at a certain point of that experience my life was in danger.  So I can put myself in your shoes a little, I can try to guess what your spirit, heart and guts are going through. I can try to imagine how you organize yourself exactly so that you won’t lack courage.  On this last point, I know, we know, that you have a first class resource: poetry which I would not hesitate to define as a school of courage.  And doesn’t real courage  reside in what that school teaches us to practice- i.e., to seek the truth about ourselves, at whatever price, to forgo the need for agreement, of whatever nature, to seek independence from the powers that be, to bond with the language we express ourselves in, to be loyal to the word given in what we write?

Having read your collection  “Instructions are inside”, first in Arabic and then getting to know them more intimately by translating them into French, I have become convinced that you have fully honored the demands of those teachings and have integrated well the principles of its ethics. And that is certainly what allows you to hold your head up high, in your cell, but what am I saying, even in the stars. To keep, even in the darkest night, your eyes open inside of yourself and outside, on the human condition.

You know, Ashraf,  I sometimes get this crazy idea, this strange notion that where arbitrariness reigns or where freedom is violated, or human dignity crushed,  a poet’s true place is … in prison!  It is from this fortress or this “citadel of exile”  that the poet can best denounce the regime that oppresses its people. Actually, it is the regime that denounces itself, in the most eloquent of ways, by jailing its poet!

Come on now, let’s return to more rational  and deeply longed for things!  Your full and total freedom, which we, thousands of poets and hundreds of thousands of citizens around the world demand. Yes, we continue to build this dream and let us believe firmly in it! Let’s keep that hope alive, all together. 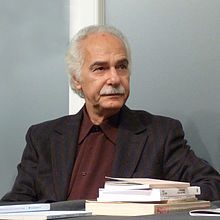 Abdellatif Laâbi  is a Moroccan poet, born in Fez in 1942.  In 1966, when he was still a French teacher in his country, he founded the important literary journal  Souffles, which was considered  a meeting place for poets who felt the need for the renewal and engagement of poetry in society. Soon Souffles succeeded in becoming a magnet for all creative energies in Morocco, including those of painters, film directors, theater workers, researchers and intellectuals. The journal was banned in 1972, but in its brief life it opened the artistic life of the country to the cultural experiences of other countries, both in the Maghreb and the Third World.  Because of his political beliefs and his writings, Abdellatif Laâbi was jailed, tortured and sentenced to ten years in prison for “crimes of opinion”, a sentence he served between 1972 and 1980. In 1985 he was forced into exile in France and has lived there since.